I see after doing the upgrade to 17.04 (via 17.00 first) FFDshow for audio decoding is removed, so that broke audio my htpc which is windows 10 running window media center. Yeah, I am still running mce as I have for 10+ years. Its wife approved, and familiar so we stick with it....

My audio situation is unique, and I'll explain in brief detail, hopefully a better solution exists now and the k-lite pack may contain all I need? I dont know. Here goes:

Windows media center is connected to my soundbar which is atmos 7.1 (7.1.2). So the htpc connects directly via hdmi (nvidia gt1030) to the soundbar (LG sk9y) because the tv is only ARC and doesnt support atmos pass thru like eArc does. I had it setup to use FFDshow for AAC audio, because it was the only way I could figure out how to get 5.1 or 7.1 from AAC. I use MCE and Emby and the default player is not changed so it uses whatever windows media center uses (windows media player I guess)

I know in the past, you could encode all audio streams to dolby digital and that would make aac audio work in 5.1? Not sure if thats still the best option or not? (hoping not)

Now, heres the big wrench, which may need its own thread? When I have windows sound config (right click on speaker in icon tray) set to anything other than stereo, playing recorded tv from windows media center the audio gets stuck in a glitch loop and repeats the first second or so of audio until you press stop to stop playing. This only happens when playing back local broadcast tv MCE recorded from my hdhomerun tuners. Setting windows speaker config to stereo works only, anything else eventually gitches (right click on speaker in lower right tray and set stereo/5.1/7.1/etc - only stereo reliably plays audio always). It still plays dolby digital when its recorded in those same tv files however, so it works as intended.

SO: Whats my solution? is there a better way to play 5.1/7.1 AAC files (mkv/etc) directly thru hdmi even when the pc is set to stereo? and make everything work as intended?

Get the 17.0.4 beta installer:
http://codecguide.com/klcp_beta.htm

Run the installer and enable the option to use ffdshow audio processor for all apps.

If that does not load it, then it is possible to enable the ffdshow audio decoder with the Codec Tweak Tool.

Run the installer and enable the option to use ffdshow audio processor for all apps.

If that does not load it, then it is possible to enable the ffdshow audio decoder with the Codec Tweak Tool.

It was set to use manually and I had it all set to work they way I needed it to, but after the update (yesterday) audio stopped. Looking at tweak tool it looks like its referencing ffdshow audio that is not installed, I looked for it (ffdshow audio) and its not installed or I cant find it or I obviously dont know where to look (its not in the klite folder).

It says invalid decoder for AAC.  I guess thats still the best way? Nothing has improved or works better than ffdshow? 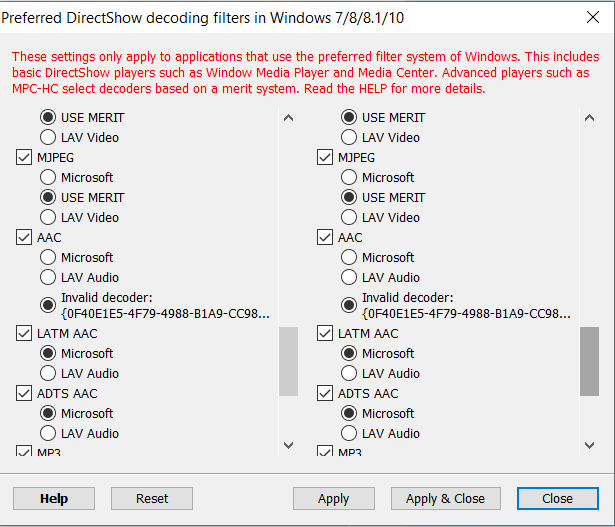 Use LAV as decoder. I should hopefully load ffdshow for processing.

Otherwise you can enable ffdshow decoder in DirectShow filter management section of CTT.