hi there,
using current K-Lite Codec Pack MPC with madVR for HEVC 2160p Video the Color Controls are not working. No Problems playing AVC 720p.
This is not a specific Problem of MPC only, since it also appears with VLC and Pot Player. Guess there is some Stream Protection happening since the Content is HDR. The Video shows too dark, Brightness Control is needed.

It if does not work it is the driver's fault. It may be possible that it intentionally disabled it when outputting HDR.

You could try letting madVR do the tonemapping instead of the TV.

madVR settings > devices > HDR > tonemap using pixelshaders
and the adjust "target peak nits" value. Lower value should give brighter picture. For example try 150. If even 100 is not bright enough, then something else may be wrong. In that case press Ctrl+J to view madVR statistics overlay and check if it gets proper HDR metadata.

i played a bit with madVR doing the tonemapping. no change at all. statistics: 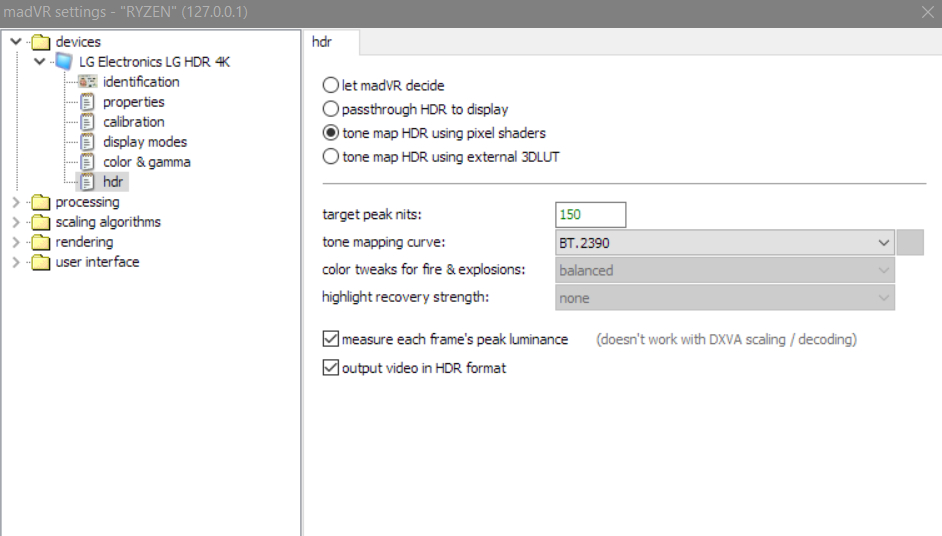 I just tried on my system (with NVIDIA GPU) and here it also doesn't work with madVR for HDR video. Also not even with madVR's internal brightness shortcut set. So it might be a bug in madVR.

It does work here with "MPC Video Renderer".

here none of the renderers available do it.

Make sure that all color control related options in the AMD driver settings are disabled. Because if any of those are enabled, it will ignore the settings from the player/renderer.

as far as i can imagine now everything related is disabled. no change.

i even disabled every single option in the driver, rebooted and checked other renderers again. no change

I don't have a solution for you. I can only suggest to try different driver versions.

I was having a similar problem.
MadVr color controls worked fine on my most recent travel videos (h264 progressive, recorded in Panasonic cameras), but did not work in the older ones (some were h264 interlaced, recorded in a Canon camcorder, and some were with dv/dvsd codec, recorded in older camcorders).
The problem was that, in my NVidea control panel, in "adjust video color configuration", my second monitor (the one I used to play the videos) was set to "with NVidea's configuration". And this was not obvious, as, when I opened the corresponding panel in Nvidea Control Panel, it by default showed the configurations for monitor 1, which were ok.  Had to click on the second monitor to see its configurations and see it was set to use Nvidea's configurations. After I changed the settings (to "with the video player configurations", MadVR color controls begun working fine in all my travel videos.

Yes, colors must be application controlled in GPU settings. This setting is the first that should be checked.