There's a game, Disgaea 5 Complete, that for whatever reason, has an issue where the intro cutscene, which is a video file played via DirectPlay, that plays on launch or when you go to the cutscene archives, is a black screen with audio on some machines. Considering it's very possibly missing a codec or calling on the wrong codec, I figured asking here would give me a better idea of what is actually happening here. The publisher, NISA, has released a patch to use MediaFoundation, and supposedly this player is used automatically on AMD CPUs. There's a config option to switch players, but on machines like mine, both just don't work.

According to an official dev post, the config option is at C:\Users\[username]\AppData\Roaming\Nippon Ichi Software, Inc\Disgaea 5 Complete\[#]\config.ini

The actual video file plays just fine in MPC-HC and Windows Media Player, and appears to be a normal WMV file, unlike those weird hybrid files from Persona 4 Golden that also caused issues for some people (I couldn't reproduce the issues myself), and you can find it in the game's install directory, under Data\Movie\dis5_en.wmv

Even if this can't be fixed externally, actually knowing what's happening would be great.

Doesn't fix the problem, in fact, Irfanview doesn't have this issue at all, and plays the video normally. I downloaded the full version so I could test the file with GraphStudioNext (I used the x64 version), and it actually failed to play in GraphStudioNext, so SOMETHING appears to be awry with the codec. At first, I got the first bit playing, but then it immediately stopped and white screened, unless I put on full screen, in which it turned black, like the actual game did.

It is a good thing that it fails in GraphStudioNext. It means we can experiment to find a solution.

Does it succeed to build the graph automatically? If so, make a screenshot for me.

In MPC-HC you can also see what it uses by looking at: Menu > Play > Filters

Instead of the MS filters you can also use codecs from the pack (select advanced installer, or run installer second time):
LAV Splitter
LAV Video Decoder
LAV Audio Decoder

Either use all MS filters for Windows Media, or all LAV. Mixing them gives issues with certain files.

Another potential issue could be the resolution of the video. It that perhaps very high (4K)? Because that is not supported by the system default video renderer from Windows (VMR7).
As an experiment you could remove the video renderer from the graph and replace it with VMR9 or EVR.

Which graphics card do you have? And which version of Windows? 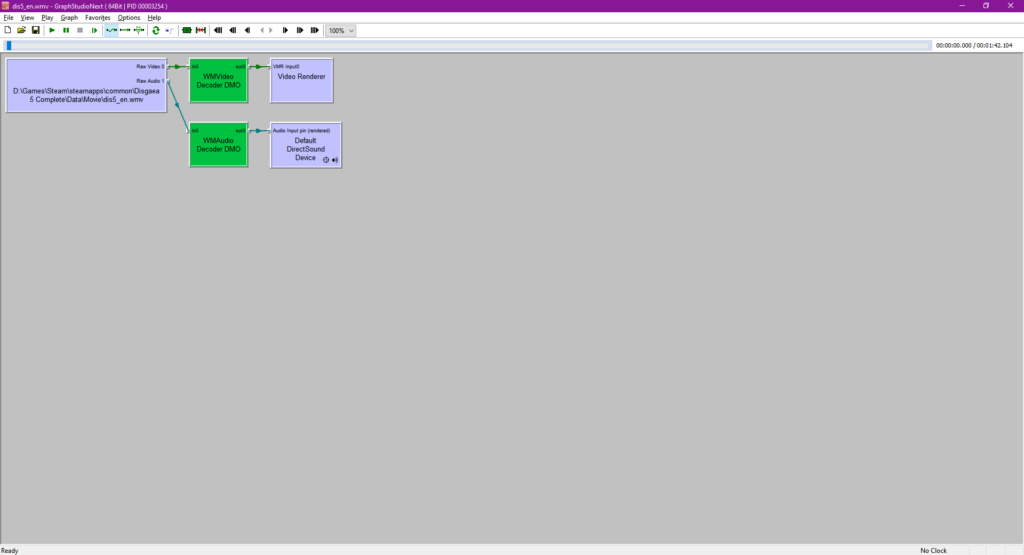 My graph looks like this, I tried switching the renderer out for VMR9, since I was using MadVR in MPC-HC (I have some custom upscaling settings), I also tested that, as well as VMR7, EMR, and MPC Video Renderer. VMR7 failed, as did MPC-HC, but the others succeeded. MPC reported the following for loaded filters:

I have a GTX 1060 6GB (an XLR8 model, if that matters), and I'm running the current version of Windows 10 Pro. Thanks for the help, I've sunk a lot of time into this game and it always bugged me that the OP cutscene never actually properly played ingame, and I intend on posting this thread, should you give me permission, in the official tech support area, which is apparently the Steam Forums, oddly enough.

I switched to LAV filters, MPC-HC still played the file, and did properly load the LAV filters instead, none of the default Windows filters loaded, but GraphStudioNext still failed to play it, even after I had manually rebuilt the graph to use LAV Splitter Source, LAV Video Decoder, and LAV Audio Decoder.

Oh yeah, one last detail, the video file is 1920x1080, bitrate doesn't appear to be particularly high, the file's just about 130mb.

Restart GraphStudioNext and it verify that is now uses VMR9 by default. This might solve the problem in the game as well.

If the game is 32-bit do it in 32-bit GraphStudioNext, otherwise in 64-bit version.

That solution worked perfectly, which just leaves one last question, and that is, how can I explain this in a way that the tech support agents who scour the Steam Forums will understand? Because this is a widespread issue that affects a LOT of people in the forums, and it's a known bug with this game.

For the gamers on the Steam forums you could post the above solution of adjusting the filter merit.

Another thing you could test (with default merit 0x00200000) is this:
Codec Tweak Tool > Various Tweaks > uncheck "Use DXVA hardware acceleration" for Window Media Video Decoder

For the developers you could say that the playback problem is related to the system default video renderer that DirectShow uses. They can fix it by creating a custom filter graph in the game, where they insert "Video Mixing Renderer 9" as a preferred filter. This is a standard filter from Windows. That should be enough information for them to be able to fix the problem. Assuming this workaround also works for others.

Why this video fails to play for some people I don't know. Could you upload the video somewhere for me? Then I can check it and maybe I notice something unusual.

The cutscene in question

Disabling the DVXA hardware acceleration did not work, sadly.

On the offchance a custom rule involving the game EXE can be made, the name of the EXE is simply "disgaea5.exe"

It is not possible to control standard DirectShow graph building behavior for system filters, other than changing merits. They need to fix it by customizing the graph building.