I have a problem with LAV video codec (The red one on the taskbar) that won't let me play some games; at the moment Silent Hill 3 (sh3.exe) and Grand Theft Auto III (gta3.exe) are very affected. The intro video of Silent Hill 3 has an extreme lag and GTA3 won't even run; the trick there is to press any key quickly so the video can't play and LAV can't ruin it, it takes several tries though.

The only way to make these problems go away is to uninstall K-Lite Codec Pack 11.0. but it also raises new problems as some files becomes unknown and unplayable to wmplayer.exe (Windows Media Player 11).

So my question is: How do I keep LAV and any other codec away from my games? I tried with the ffdshow blacklisting but it doesn't works, LAV keeps processing in-game videos, It's driving me nuts!!

It is possible to disable use of LAV for specific applications using its blacklist.

You can add those games in this registry key:
HKLM\Software\Lav\Video\Blacklist

Those two games shall be added by default in next version.

Sorry by bringing back to life this old thread but it's for a good reason: the Admin's method worked. Now I can play SH3 without having to uninstall K-Lite first... sweeet!!

This is happening to me whenever I play dota 2, the menu runs smoothly but when I start a match then it happens, stuttering audio everywhere, 10 fps, it breaks everything, had to activate the command "-gl" to fix it, but I can still notice some freezing at some points; it also worth mentioning that it sticks to my entire audio, online videos, videos, even clicking sounds, everything gets slowed, as long as it has audio or a video, some games are unnaffected tho, like killing floor 2.
I'd like to know why this happened, and if I should wait for a new release or anything.

Your problems are most likely caused by your sound driver. Try updating it.

If you see the LAV icons appear during a game, then you know they are used. Playback of online videos does not use anything from the codec pack.

Admin wrote:Your problems are most likely caused by your sound driver. Try updating it.

If you see the LAV icons appear during a game, then you know they are used. Playback of online videos does not use anything from the codec pack.

Updating my sound driver actually fixed it, thanks babe.

Good to hear the problem was solved.

Here's some news, the problem persists, I know it is related to klcp, because whenever I uninstall, the problem goes away after a reboot, otherwise it doesn't, rebooting without uninstalling does nothing.
I also discovered that if I activate a startup command in dota 2, the game no longer lags at all when this issue comes up, and after some research I found out what the command does:

Some guy wrote:The reason you get an FPS boost is only because your operating system has dependency issues related to Direct3D 9Ex. It's a problem with your system in general and not Dota.
Dota has default support for Direct3D 9Ex on Vista and Windows 7 operating systems that allows it to use the WDDM architecture to allow lower memory consumption, quicker shifting between tabs and etc. Something on your system is causing an issue with how programs interact with this graphics system causing the lag. You will face similar issues not just with Dota but any other application that calls for these.
By entering -nod3d9ex you are basically forcing the game to not use this ability and hence only bypassing the issue that your system has rather than addressing them. It's more of a work around JUST for your PC and those with similar issue and not a FIX.
If you want to truly fix this problem, you have to sit down and see which software on your PC is causing this problem. Generally they are visual applications.

I'm sure this can be of some help, the issue has to be somewhat related.
This didn't happened before, I also believe there might be something related to the software ShareX ,it kinda let's you record on screen and tried working on some video quality stuff and I know the issues began from that point, it might have switched something, here's the menu that I was in trying to increase quality. 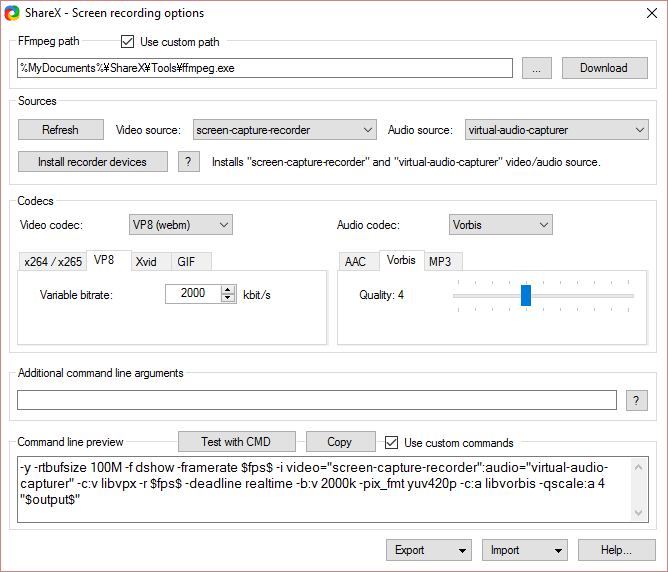 Also note that whenever I try to take a picture with this program it slows my pc a massive lot, like the mouse lags and audio goes laggy as hell, even pressing escape to quit the screenshot menu takes like 3 seconds.
One more thing, whenever I do a fresh install of klcp or other similar programs everything works fine for a day or something, then it goes all laggy again, my bet is on ShareX doing something to the codecs or something, but I'd like to have more insight on this.
EDIT: This might have something to do with it.

vbisurf.ax is a standard component of Windows. I don't think it is related to your problem. You should be able to fix it with this command regsvr32 vbisurf.ax (assuming the file isn't missing).

So does the problem only occur after using ShareX? Then you should try a different recorder, like Fraps or Bandicam.

ShareX uses ffmpeg.exe for encoding the audio and video. It uses DirectShow for capturing the input. I don't see an obvious reason why the codec pack would have any direct effect on it. Are you perhaps using ffdshow for audio/video processing?

Is hardware acceleration enabled in the codec pack? If so, have you tried disabling it?

I think I might be using lav+ffdshow or something.
And I do believe hardware acceleration is on.
Also yeah I could blacklist that but the problem would still be there.
Here, I have a list of codecs here in case there's something that might be important, there's 2 that are broken, I'll just link a pastebin HERE
Also here I just realized this. 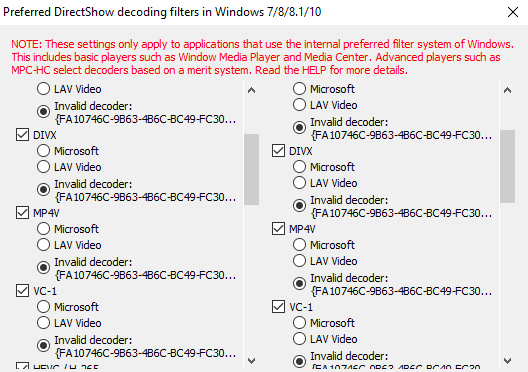 And I can't fix the "vbisurf.ax" file, I get this error 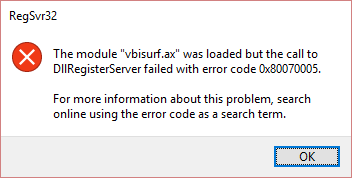 Right-click on "Command Prompt" and select "Run as Administrator". Then regsvr32 will work correctly.

The other broken entry is for tm20dec.ax, which isn't a codec from Windows, but some very old codec that was installed by a game. You can clean leftovers with:
Codec Tweak Tool > Fixes

Assuming the problem still exists after doing all the above:
Codec Tweak Tool > Preferred Decoders > Reset (to windows defaults)

Codec Tweak Tool > Codec and Filter Management > DirectShow
Disable filters one by one and test. Start with ffdshow. This should allow you to find which filter(s) causes the problem with ShareX.

the problem still presisted after I did all that, so I disabled all of the ffdshow codecs in DirectShow (x86) and DirectShow (x64) and I had to reboot my pc to see if it worked, otherwise I wouldn't notice if it got fixed or not, so turns out it worked, now I know it's one of the ffdshow filters, but I gotta reboot everytime to see the changes, I guess I gotta start enabling one by one, should I start with x86 or x64?
32 bits:

I'm not sure which one gets used the most, I'll guess the 32 bits, just showing you I disabled the same ones in both versions.

Try 64-bit version first. Start with the video decoder. The processor filters are not used by normal applications due to their default merit, so it is unlikely because of them.

There is a blacklist option in each ffdshow filter:
settings > DirectShow Control

So remember that I told you that when I do a clean install and reboot klcp works just fine, the thing is, in here that ain't the case, it's like something makes the codec break, I can use a clean install of klcp without destroying sharex and all that stuff, and then it happens out of nowhere, basically I can't really snipe out what's causing it, hence I can't check which one is the codec that's causing the issue, it'll take me months probably, so I'll just activate all of them again, and the moment I realize my audio starts stuttering again I'll check what I did the past 5 minutes and try to figure out what is it that I did recently that might have caused it, this might take a while tho.
Let me clarify again that it doesn't just breaks dota 2 and sharex, it makes every single audio that comes out from my pc stutter, and it's even worst when I use the video player, it kinda takes like a second to click forward in every single video and it stutters at the start of that click, also when there's a lot of "effects" in a video it just starts to slow down; normally it just goes to the next frame instantly no stutter after click, anything, works perfectly.

There is a way to compare both situations.

Create a log and a backup in the working situation and in the broken situation. Put everything in a zip/rar/7z archive and upload it somewhere (like http://www.sendpace.com ). I have tools to do text and file comparisons, so I should be able to quickly find any differences.