I have few questions about setting mpchc for highest picture quality. I downloaded k lite mega and in installation I choosed lots of stuff, for video renderer i choosed madVR, for gpu encoding i left it at default. After the installation has finished i opened a 1080p mkv and in madvr setting i made following: at devices i choosed digital monitor, at processing i left everything at default, at chroma upscaling i set jinc 3 taps with AR, image doubling i only thicked use nnedi3 to double luma resolution, at image upscalling i also choosed jinc 3 taps wit AR and at image downscalling i left catmull-rom and turned on AR and LL. I rendering i unthicked  enable automatick fullscreen exclusive mode.

1. Are this the highest setting for MPCHC/madvr?
2. Is everything  properly?
3. For subtitle rendering some people recommend XY-Subfilter Beta. Is XY-Subfilter Beta included in klite? Is  XY-Subfilter beta better than MPCHC     internal  renderer ?
4. Has someone any suggestion?
5. On some  pages on net like http://www.techsupportalert.com/best-free-windows-media-player-replacement.htm say that codec pack are bad is that true?
6. Is my pc fast enough for madvr?

1. The best madVR settings are a bit subjective, but your current choices are good.
2. You maybe could also enable Smooth Motion. Alternatively you could change the standard refresh rate of your display to 59Hz as that generally works better than 60 Hz for video playback.
3. I don't recommend using it, as it is still experimental and a bit unstable. The internal subtitle renderer of MPC-HC has had some major performance improvements lately, so performance difference with xy-Subfilter is much smaller now.
4. You don't really need "lots of stuff" profile for general video playback. It mostly adds some extra tools and encoding related components. In fact, the Standard version of the codec pack is more than sufficient for the majority of people.
5. People who say that know very little about codecs. Codec packs and the codecs themselves have evolved a lot in the past ten years. The K-Lite codec pack is very advanced and has several features for detecting, fixing, and avoiding problems. It is much easier and cleaner than installing codecs manually. Plus you can always get help here in case of any problems.
6. You have a fast GPU, so it should be able to handle your current settings. You can view rendering statistics by pressing Ctrl+J. If playback is smooth and you don't get any dropped frames, then everything is OK. Some performance improvements are to be expected for nnedi3 in upcoming versions.

Does anybody know how to set this font style for subtitles in mpc hc like in this video
https://www.youtube.com/watch?v=javVbAl-xbc

You mean the black background?

I meant what parameters should i change in MPCHC to get exactly that style which is in the link i gave you(font type opaque box....) 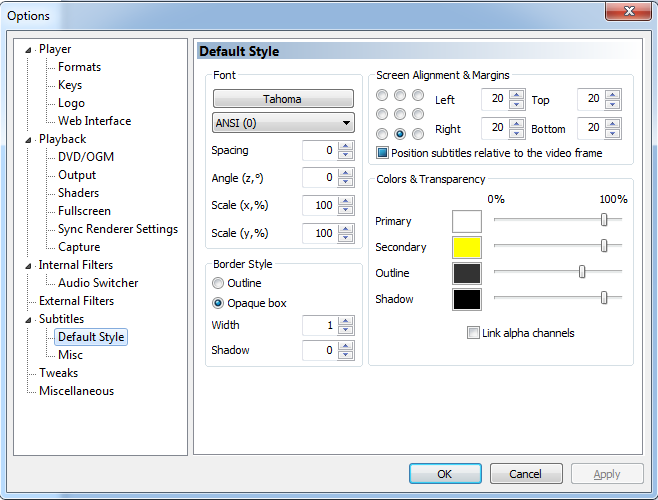